Weiss (ヴァイス, Vaisu) is a playable character in the Arcana Heart series and the main character of Arcana Heart 3. She is a Valkyria created by the Drexler Institute, built sorely to serve them before Petra rescued her and took her under her wing.

Her Arcana is Gottfried, the Spirit of Týr.

Weiss is a pale-skinned girl with red eyes and platinum blonde hair that is short out of battle and very long, dropping down to her ankles, in battle. She wears the Rosenberg Academy Junior High outfit, black shoes and black gauntlets with gold fingers.

She is considered to be stoic and antisocial. Her interactions with other characters besides Petra could be considered awkward, since she had no knowledge of the outside world.

Weiss is very honest as she doesn't like when people lie to her, as described by Scharlachrot. She has also taken an interest in baking thanks to baking lessons from Heart. 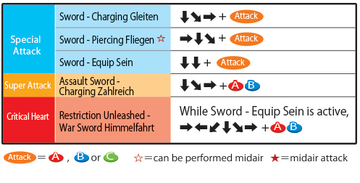 Weiss was involved in the Drexler Institute the same way Scharlachrot was. But after the organization was overthrown by Petra, Weiss came with her in order to be rehabilitated back into society. Weiss knows nothing about the real world, unfortunately, and is having trouble fitting in. Her expressions seldom change, but she cares deeply for her new friends and comrades. She believes Scharlachrot may have something to do with the recent unusual events and has gathered the courage to investigate the situation on her own.

Retrieved from "https://arcana-heart.fandom.com/wiki/Weiss?oldid=8608"
Community content is available under CC-BY-SA unless otherwise noted.