Tempestas is one of the selectable Arcana in the Arcana Heart series. It's the Arcana of Wind and its user is Lilica Felchenerow.

Tempestas is a meta-existence embodying the power of the wind. As you would expect, it can change air pressure and control wind of its own free will. It was once gravely wounded but nursed back to health by Lilica. Out of gratitude, it lends its power to Lilica for as long as she desires. 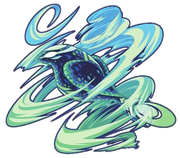