Story Mode is a game mode in the Arcana Heart series. Included in the console versions of the games, the mode primarily focuses of the story of the series.

Upon selecting a character and arcana, and after a brief introductory cutscene, the player can choose who to fight from among three to five choices, a sixth being random as included in Arcana Heart 3. The only times you can't choose is when facing against a certain character, for example Heart vs. Saki, and when facing a boss character, like Mildred or Ragnarok.

When facing a boss, the player has a certain amount of time to defeat the boss, lest they get the bad ending.

NOTE: Player must win every round without losing one round 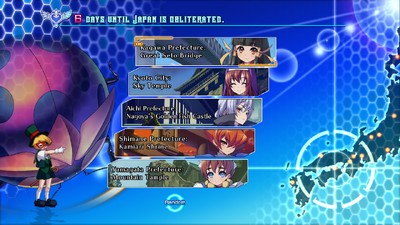