Score Attack is a game mode in the Arcana Heart series. Included in the console versions of Arcana Heart 3 and its revisions, the mode primarily focuses scoring high as possible.

You only face four random characters and a fight with Parace L'sia at the end in two rounds. Unlike other fighting games where if you lose in the mode, it's Game Over, once you reach Parace, the game gives you an option to continue if you lost.

Score attack is renamed as Survival Score Attack. Unlike the previous version, you can fight all the cast. Gold palette characters appear randomly and defeating them will reward you most points. 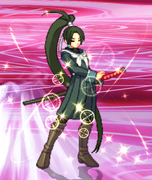