Saligrama is one of the selectable Arcanas in the Arcana Heart series. It's the Arcana of Luck and its user is Eko.

Saligrama is a mysterious die-like mechanism from ancient times. Its powers are strong enough for it to be called an arcana.

Saligrama - 236+A+B+C - Summon Saligrama, who will perform an exploding dice attack depending on what side it lands on. If it: 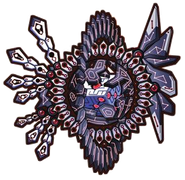