Phenex is one of the selectable Arcanas in the Arcana Heart series. It's the Arcana of Tone (Sound in English version) and its user is Akane Inuwaka.

Phenex is said to be the source of people's love for music. It is a meta-being that can manipulate all sound. Its voice can raise the heavens or bring destruction to the world. Phenex was charmed by Akane's singing voice and now lends its power to her whenever she needs it. 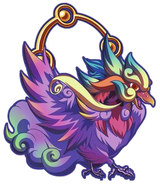 [The Voice that Charmed a Spirit]