Partinias is one of the selectable Arcana in the Arcana Heart series. She is the Arcana of Love and her user is Heart Aino.

Partinias was once a maiden that proclaimed the miracle of love even unto her death. Becoming an Arcana after her death, she can now soften any conflict with her warm healing light. She has pledged to help Heart as long as she does not forget the power of love. 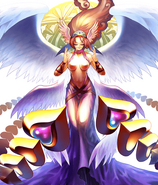 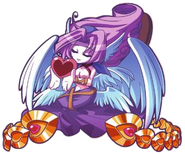