Ohtsuchi is one of the selectable Arcana in the Arcana Heart series. He's the Arcana of Earth and his user is Maori Kasuga.

Ohtsuchi is an arcana based on the belief and faith of mankind, formed in the shape of a giant clay figure. Whenever the Kasuga family needs assistance for exorcising evil being, Ohtsuchi gladly lends his powers. 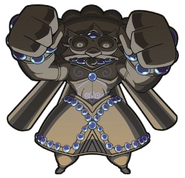