Niptra is one of the selectable Arcana in the Arcana Heart series. It's the Arcana of Water and its user is Kira Daidouji.

Niptra was once the largest organism in the sea from ancient times; it eventually became a higher existence. It can freely control all water. Out of boredom it decided to lend its powers to Kira, who had declared her intention to take over the world.

Nimbus - A+B+C - During Nimbus, all normal attacks will slow down an opponent when they connect.

Regnum - - Summon Niptra, who will swallow up the entire screen, slowing down your oppponent. 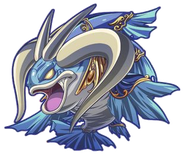