Mildred is one of the selectable Arcana in the Arcana Heart series. She's the Arcana of Halo (Light in the English version) and her user is her older twin sister, Angelia Avallone.

Angelic Halo - A+B+C - During Angelic Halo, Mildred is summoned to your side to perform arcana special attacks.

Divide Breath - - Mildred will perform a massive laser attack from the sky. 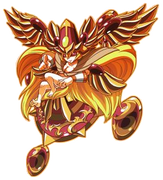