Lang-Gong is one of the selectable Arcana in the Arcana Heart series. It's the Arcana of Fire and its user is Mei-Fang.

A wolf that lived an extremely long life in Shangri-La moved on to a higher plane of existence. It can now control flames at its own will and incinerate its opponents. Lang-Gong endlessly seeks further evolution of itself so it decided to accompany Mei-Fang, whom is also a newly created existence, to see through all of her possibilities. 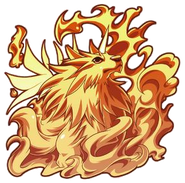