Heliogabalus is one of the selectable Arcanas in the Arcana Heart series. It's the Arcana of Mirror and its user is Dorothy Albright.

This Arcana looks like a giant swarm of ladybugs together, spiraling and glittering like a kaleidoscope. Heliogabalus used to be the Arcana of Dorothy's mother, but now protects Dorothy herself. 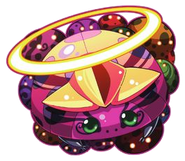