Gottfried is one of the selectable Arcanas in the Arcana Heart series. It's the Arcana of Týr and its user is Weiss.

With Tyr from Norse Mythology as the motif, Gottfried is the god of war outfitted with mechanical armor by Drexler. 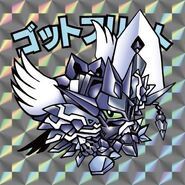