Dieu Mort is one of the selectable Arcanas in the Arcana Heart series. He is the Arcana of Evil and his user is Yoriko Yasuzumi.

Dieu Mort was once a man sentenced to be executed. While he was alive he was called the God of Death. Upon dying, his soul lived on as the Arcana of Evil. In exchange for Yoriko's magical powers, Dieu Mort condemns his opponents to death using whatever underhanded methods he can think of.

Execution - - Summon Dieu Mort, who will grab an opponent and performs a scythe attack. Inputting up or down determines whether it is a high or low attack. 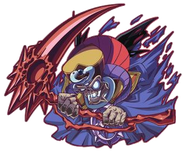