Baldur is one of the selectable Arcanas in the Arcana Heart series. He's the Arcana of Fenrir and his user is Scharlachrot.

With Fenrir from Norse Mythology as the motif, Baldur is a holy spirit that has been fit into a mechanical armor. 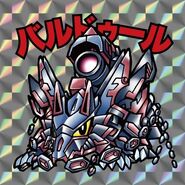