Anutpada is one of the selectable Arcanas in the Arcana Heart series. It's the Arcana of Time and Space and its user is Kamui Tokinomiya.

Anutpada is a mysterious clock-like mechanism that has lasted since ancient times and became an Arcana. It has the ability to manipulate time and space at its whim. Anutpada will lend its strength to those who try to preserve the equilibrium between the material world and the time-everlasting spirit world.

Rigonsetsu no I (Thoughts of the Inexpressible) - A+B+C - During Rigonsetsu no I, time accelerates for everything but your opponent.

Honfujou no I (Thoughts of Everything and Nothing) - 236+A+B+C - Summon Anutpada, who, after a slow startup, will completely stop the flow of time for twelve seconds. 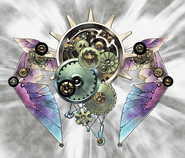 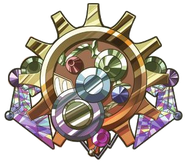